Earlier in this series we looked at ploughing, and some smaller implements and machinery used to break up earth. One can achieve much the same cultivation result as using a plough and disk, or using a tractor-drawn rotavator, with a single, non-powered implement, in one pass. That is a sprung-tine cultivator, sometimes also referred to as a tiller.

And, available in a variety of number of tines and working widths, there is a Category 2 cultivator to suit even the smallest Cat 2 tractor.

The theory behind a sprung-tine cultivator is to break up the top 10 to 15cm of soil, uprooting old roots and new weed growth, while leaving behind a smooth, soft planting surface ~ and all in one pass.

The smallest of such cultivators will have five tines, in two rows of three and two, with the two rear tines positioned to cultivate in the gaps between the front three.

The same offset arrangement is found in models with more tines.

The tines themselves have two basic shapes, dictated by the soil type to be worked. One is shaped like a jet fighter’s wings, the other is simply pointed at the end, about 5cm wide and curved forward so that it is encouraged to dig into the soil as it is pulled along.

Attaching the tine to the frame there are two common designs. One is a sturdy, S-shaped length of spring steel, the other a more elaborate arrangement involving a strong spring which compresses to allow the tine to swing backwards when it encounters a solid obstacle, springing back into position when the obstruction is passed.

The advantages of a sprung-tine cultivator over other ground-preparation implements are, firstly, that one gets to complete the job of breaking up the soil, uprooting growth and levelling in one pass. Secondly, because the implements are relatively light, one can be assured of sufficient working width behind even a small tractor to be able to cultivate the tractor’s wheel tracks with each pass.

Also, the purchase cost of a sprung-tine cultivator compares very favourable with the cost of a rotavator.

This is part five in a six-part series on Cultivation. For more, click here. 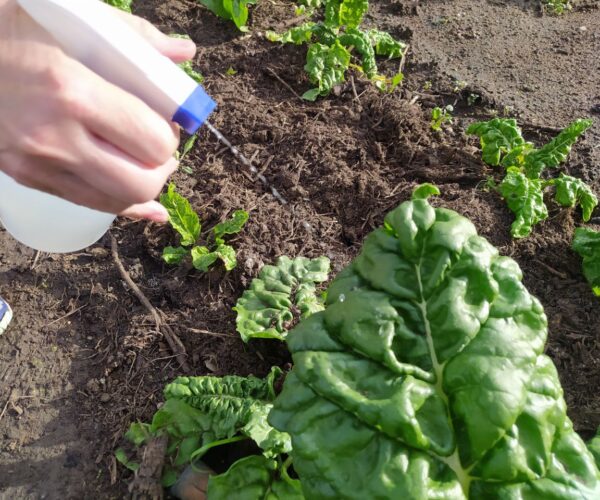 3 months ago
Vegetable growers sometimes spray liquid fertiliser on the leaves of their plants and this is...